Cachaca is basically rum made Brazilian style. Contrary to most rums, cachaca is not made from molasses. Instead, the base wine is fermented from fresh or reduced sugar cane juice. Right, a bit like rum agricole.

The resulting wine is distilled into a high proof spirit. The cachaca can be consumed white, after just a few weeks of aging. Usually at 40 to 45%. And it can be aged in barrels at around 50 to 60%.

Mind you, officially cachaca has to be made in Brazil. It is also called Brazilian rum. But let’s call it a cachaca here anyhow. Hey, what do I know? Maybe you are from Brazil!

What is cachaca not?

Well, it is not rum. Rum is made from the molasses that remain when sugar is extracted. The molasses has residual remaining sugars that ferment into a rum wine. The rum wine is then distilled into rum. Either via potstill or via column still.

In general, rum has a spicier and deeper flavor profile. Cachaca is fruitier, more lively, since it is made directly from the (fresh or reduced) juice that’s pressed out of the sugar can stalks.

What ingredients and tools are needed to make cachaca?

To distill the 180 liters of wine you need:

What is the process of making cachaca?

How to finish your cachaca?

The white stuff, cachaca prata (“silver cachaca”) can be diluted to 38%. Anything between 38 and 54% is still cachaca territory. I’d advice to dilute to around 43%. The stuff you age in a barrel (usually up to a year) may be best barreled at 45 to 48%. It is called cachaca dauro (“golden cachaca”).

One final trick you can use to influence the flavor profile of your cachaca is to add a little bit of sugar (or better: the panela or muscovado sugar you started the fermentation with) to the bottle. It will both highlight the cachaca flavor and slightly sweeten your drink. Legally, one is allowed to use up to 6% sugar, but you’ll probably find 3 to 5% enough. More back sugaring is possible, but then you are officially making a “sweetened cachaca”.

No problem. If you have an iStill 500, 2000, or 5000, things go pretty much the same. When you have an agitator and boiler radiator on your iStill, you can do the fermenting in the iStill as well. 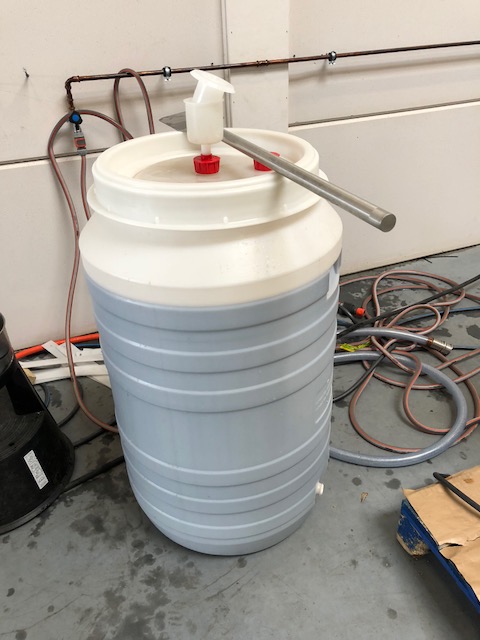